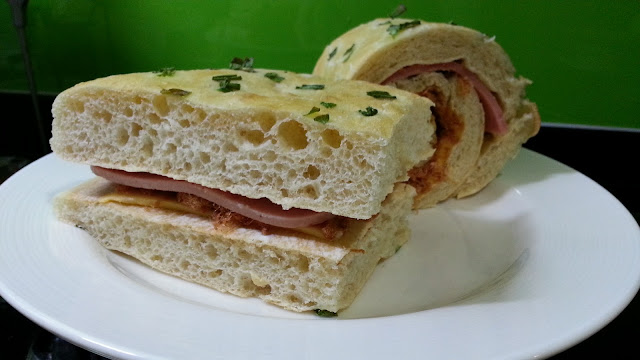 I've probably baked Tangzhong bread about 10 times since I first learned about it 2 years back. Frequently, I tweak each try slightly, just for variety and for the easily-bored personality of mine. Yesterday, my hubs commented "this is your best bread so far!" Happy! but I highly suspect that it's rated highly because of the addition of pork floss. Somehow, pork floss with melted ham & cheese, a combination I fell in love with in Taiwan, resonates with everyone.

I found the previous TZ overnight recipe slightly too light for me; I like to have chewiness in my bread, so I sub 50g of white bread flour to whole wheat flour. For convenience sake, I also used the bread maker to help with the kneading as it means I don't have to watch over the ken wood closely in case it goes into overdrive (Which it does if I keep the machine going at high speed continuously). This also meant that the first proof was longer and I was even afraid that it would have over-proofed. The yeasty beer-smell was very strong when I took the dough out after the overnight fermentation but thankfully was not apparent after baking.

The bread turned out really soft, and was a tad heavier than the previous batch, which is just nice for me. However, it does not have that sweet soft bun taste that bakeries tend to have. I'm hoping that also means our usual home-bakes are higher in the health quotient!

Put all ingredients in bread maker machine and use the knead program. At the end of the program, remove dough into a plastic container, cover loosely with cling wrap and stick it in the fridge.

Notes:
I rolled the dough into flat layers in an attempt to emulate the swiss-roll style of pork floss bread found in bakeries and so nicely baked  by HappyHomebaker.  However, a thin layer of crust formed at the top so when I rolled the bread, it cracked all over! Need to try again, prob at even lower temp or at a lower rack.

Sharing this with YeastSpotting
BYOB at Roxana's Home Baking
Posted by Corrine at 9:10 AM

Corrine
From the sunny island that is Singapore. Love my country's smooth pathways, plentiful trees and clean air. For a dose of my home-baked goodness with only fresh ingredients used, contact me at croxxy@gmail.com

I need to try these!